People choose to drink plant-based rather than animal-based milks for a variety of health and philosophical reasons. Yet many of us love our creamy latte in the morning, a bowl of cereal with milk, or a glass of milk with a meal. As a result, “plant-based” milks made from nuts, grains, seeds and beans have flooded the market and gained popularity in recent years. Some of the most popular ones that you’ll see in your grocery store include almond, coconut, rice, and soy milks; less common are hemp and oat milks.

I wondered how these plant-based milks stacked up against cow’s milk, so looked at it from a nutritional perspective, but also a cost perspective. For people who need or want to drink plant-based milks, I also wanted to see how easy it is to make some of these milks at home.

Comparing nutrition from cow’s milk to unsweetened plant-based milks
This is admittedly an imperfect comparison because different commercial recipes cause variations in nutritional content. When reading my comparison, keep this information in mind: 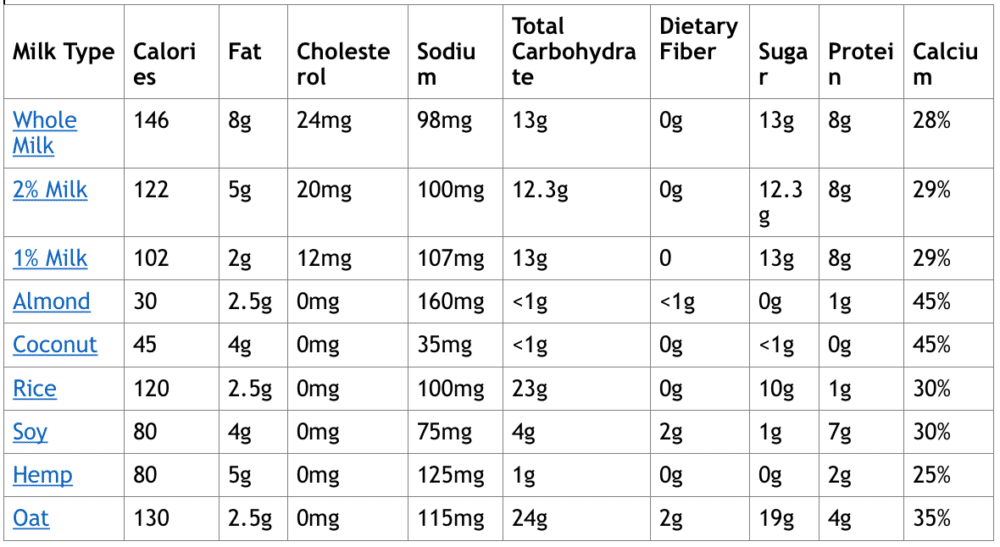 This comparison was a bit eye opening.

While high in protein, cow’s milk also tends to be higher in calories and sugar. It’s also the only milk with cholesterol. You can reduce the fat in cow’s milk by drinking those with reduced milkfat, but you can’t really do anything about the cholesterol. Rice and oat milks are almost as high in calories as whole cow’s milk, and they pack the highest carbohydrate levels. Oat milk was by far the highest in sugar content.

Only cow’s milk offers a natural source of calcium; the rest have no naturally occurring calcium and are fortified with calcium in the form of Tricalcium Phosphate or Calcium Carbonate. This review of milk alternatives notes that Tricalcium Phosphate is a form of calcium not as easily taken up by the body as Calcium Carbonate. It’s worth checking the ingredient list to get a brand that uses calcium carbonate to maximize your calcium uptake.

Comparing the cost of these milks 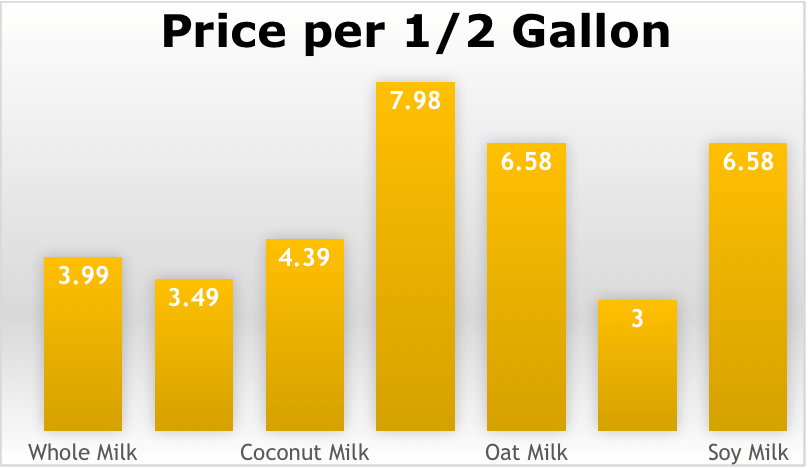 I went to my local grocery store and tried to price a half gallon, or 64 fluid ounces, of each milk. This proved a bit difficult, as I could only find Hemp, Oat, and Soy milk in 32 fluid ounce containers. For these, I just doubled the price to get 64 fluid ounces. If you could get the larger half gallon size, the price would likely drop slightly.

Hemp milk, which seems to be gaining in popularity these days, comes out at close to a whopping for a half gallon. Soy milk and oat milk were not far behind. Rice milk and almond milk came out cheaper than cow’s milk.

Make your own plant-based milk!

It seems to me that you could save money making your own milk. An added bonus? You can make it just the way you like—as sweet or thick as you want, with the amount of salt you prefer, and even with a splash of vanilla or dash of cinnamon. Here are just a few recipes that I found that made me realize that I want to try making these at home. They’re so easy!

I was surprised to learn from the article that reviewed different plant-based milks that a cup of almond milk requires only 4 almonds to make. Doing a bunch of math, I found that almond milk—mostly water and a few almonds—costs around .60 for a half gallon to make. That’s about half the price of store bought. Here’s a great recipe for almond milk from one of my favorite vegan sites, Oh She Glows.

Grain-based milks seem like they’d be the least expensive to make, and it turns out that’s true. Here’s a simple recipe for making rice milk. Again, it’s just rice and water, plus a pinch of salt and a sweetener. For oat milk, I returned to Oh She Glows for another great recipe. For some reason, oat milk was one of the most expensive milks to purchase pre-made relative to the other plant-based milks. If you’re on a budget, this is definitely one to make at home.

Making your own hemp milk is simple, but not necessarily much cheaper than purchasing it pre-made. If you can get a reasonable price on raw shelled hemp seeds, such as this special for .95/8 oz., you can make hemp milk for about a dollar less than you can purchase it for store bought. This recipe calls for 1 cup of raw shelled hemp seed to 5 or 6 cups of water. You add the seeds to some water, add a pinch of salt and some sweetener if you like, and turn on the blender. Some people strain it (and many of the other milks) to make a smoother milk.

I thought soy milk might be hard to make for some reason, but this recipe proved me wrong. With only 5 minutes of prep time, and 40 minutes cooking time you can make your own at home. Here’s a local brand of soy bean that we can buy in stores here in the Northwest, but you can also find them in the bulk food section of many natural food stores.

I envisioned hacking into a coconut to make this milk, so this one seemed like the most intimidating one to take on. While this recipe does call for using fresh coconut meat, you can also buy shredded coconut and use that instead. (Phew!) So this recipe for coconut milk that calls for shredded coconut is super easy and takes only 5 minutes of prep time and 5 minutes of cooking time. You can use it in smoothies or soups!

So many options for milk

On the topic of making your own milk, I have this special recipe for making golden milk! I enjoy both plant-based and animal-based milks, and use them for different recipes. For example, I used almond milk in my recent recipe for Summer Rolls with Dairy Free Dipping Sauce. I love each milk for its unique taste, texture, and health benefits. It’s nice to have so many options.

Do you have any recipes or tips for making plant-based milks? Please share them, if you do.

Move towards free and clear products!

Here’s what you can substitute for brown rice.